"Harmonization of the legislation in the RNM with European standards and regulations within the Ministry of the Interior", was the topic of the lecture by the Minister of Internal Affairs of North Macedonia, Oliver Spasovski, which he held today (October 31, 2022), for the students of the South East European University organized by the Student Parlaiment and Association and the Law Faculty. 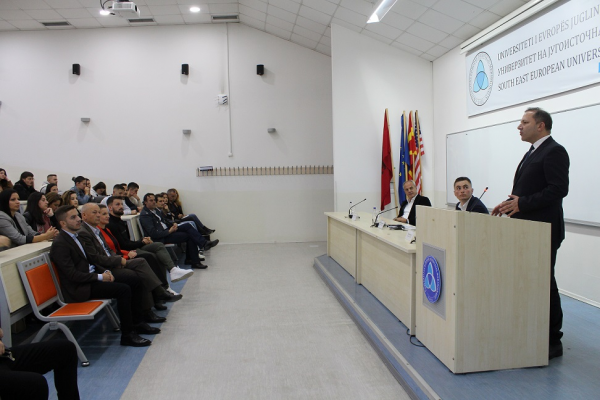 Dean of the Law Faculty , Prof. Dr. Adnan Jashari emphasized that the lecture is held at the right time and it is quite useful for the students to expand their knowledge and listen to the original information about the reforms being implemented.

On behalf of the Student Parlaiment and Association (SPA) Minister Spasovski was welcomed by the President of the SPA, Agron Demiri, who emphasized that the students will be informed first hand about the processes taking place in the direction of the country's membership in the EU.

"The harmonization of legislation is a rather large process and aims at reforms in the free movement of citizens, security and the guarantee of human rights and freedoms. But the main reform is to change the way of thinking in order to have successful implementation of the laws," said Minister Spasovski , at the lecture.

Before the start of the lecture, Minister Spasovski had a meeting with the Rector of the South East European University , Acad. Prof. Dr. Abdylmenaf Bexheti.

The students asked questions and were interested in the specific reforms and the steps taken by the institutions to speed up the process of membership of Republic of North Macedonia to the EU.