Direct testimonials from Ukraine at the Tribune held in SEEU

"Testimonials from Ukraine" was the topic of the Tribune, which was held today (December 7, 2022), at the Southeast European University, in which representatives of the local government of the Kyiv Region and the city of Irpin revealed the direct testimonials about the events in Ukraine. 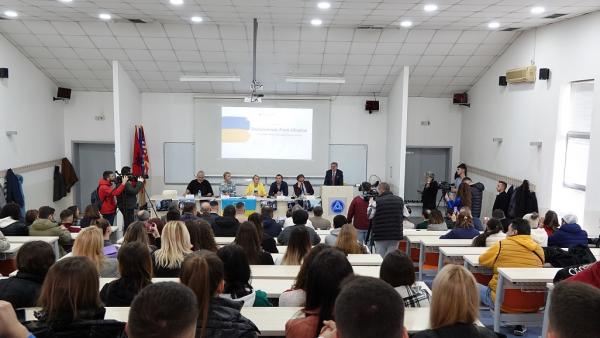 The tribune was organized by the Southeast European University in cooperation with the Balkan Institute for Regional Cooperation (BIRC).

The forum was attended by: Tetjana Sçerbak, deputy governor of the Kyiv Region, Trohim Ivanov, deputy mayor of Vishegorod, Violeta Dvornikova, advisor to the mayor of Irpin, and as the initiator, Mr. Nenad Çanak, politician and former president of the Social Democratic League of Vojvodina.

In his speech, the Rector of SEEU, Acad. Prof. Dr. Abdylmenaf Bexheti thanked Mr. Çanak from Vojvodina and the journalist Selajdin Xhezairi from the BIRC Institute, for the initiative and realization of this important visit for us as an academic community, but also for this opportunity directly to hear these testimonials about the sufferings of Ukrainians from unprovoked Russian aggression. We are supporting the righteous struggle of the people of Ukraine and with this we are proving that we are on the right side of the history.

“If one understands our Ukrainian friends better, we are among them, unfortunately not alone in this part of Europe, because here and there, as in B&H three decades ago and in Kosovo two decades ago, we experienced similar things that caused hundreds of thousands of casualties, may they never happen again”, stated among other Rector Bexheti.

Present at this event was also the consul of Ukraine in North Macedonia, Mr. Kostiantyn Kutsenko, who welcomed the event and thanked SEEU for the given opportunity to hear the voice of Ukrainians.

The representatives of the Ukrainian delegation, for the students and guests, through video footage, photographs and testimonials managed to present to the students, staff, but also the wider public a more realistic picture of what is actually happening in Ukraine. They said that it is important to understand and support their just cause with all democratic means, stressing the need for comprehensive help for the Ukrainian people.

Nenad Çanak also spoke on this tribune, who addressed the students with a concrete request to protect this peace they are enjoying, because the other side is gloomy and sad. He said that all his life he has fought for democracy and democratic values and he hopes that he has somehow influenced the achievement of peace and the establishment of a democratic system in this region.

Short videos from the war in Ukraine were presented to the public, accompanied by authentic images of cities and villages destroyed by the war.

The tribune generated debate and numerous questions from the students and staff present at this event.

Representatives of Ukraine's municipalities before the tribune in SEEU (Tetovo) took part in similar tribunes in Novi Sad, Sarajevo and Tuzla.